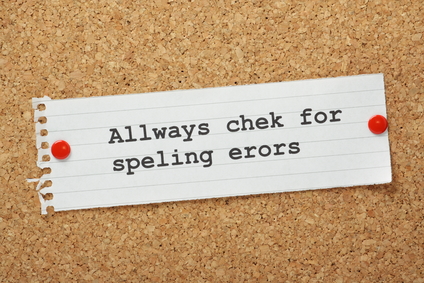 Given that there are 26 letters in the alphabet and more than 40 sounds in the English language, it’s amazing that any of us learn to spell. I consider myself a reasonable speller, but there are a few words, such as ‘accommodation’ and ‘apartment’, that trip me up. Thank goodness for spellcheck.

And some of the rules most of us were taught are shaky. I am sure many of you learnt the ‘i’ before ‘e’ except after ‘c’, but there are so many exceptions. Take this example from an article in The Age.

‘It’s “i” before “e” except after “c” – except when there’s a feisty heist on weird beige foreign neighbours reinventing protein at their leisure.’

Stephen Fry says 923 words are the exception to this rule.

However, I did come across one rule recently that I thought seemed useful – the ‘able’ and ‘ible’ rule. Like many spelling rules, it only works most of the time.

This rule is that you add ‘-able’ to recognisable root words. For example, ‘repute’ becomes ‘reputable’, ‘pass’ becomes ‘passable’ and ‘value’ becomes ‘valuable’. A word that ends in a silent ‘e’ sometimes keeps the ‘e’ (changeable), but the ‘e’ is more often dropped (desirable).

Remember: ‘able’ is a word so can attach itself to a word.

Most of the time when we use ‘ible’ the word it connects to is not a recognisable word, for instance, ‘admissible’, ‘permissible’, ‘plausible’, ‘visible’ (‘admiss’, ‘permiss’, ‘plaus’, ‘vis’ are not words).

Remember: ‘ible’ is not a word, so do not attach it to a word.

I found this useful rule in the best book I’ve come across for adults who struggle with spelling: Eyes before Ease by Larry Beason (McGraw Hill, 2006). By the way, he thinks the ‘i’ before ‘e’ rule is worth knowing in spite of all the exceptions!

Enrol in my online Business Writing course to learn more about spelling and word choice.

The Grammar Factor: numbers in business writing, apostrophes in place names In defence of the passive voice