What happens when we overload sentences

Overloaded sentences are difficult to read 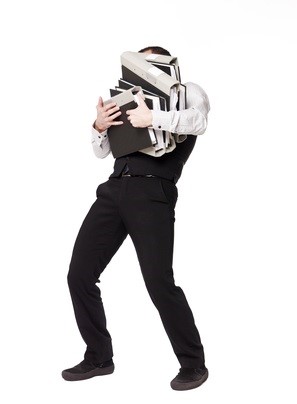 Length is often blamed for sentences going awry, but the problem is more complex than that because a long sentence sometimes works. Take Mark Twain’s beautiful example:

‘At times he may indulge himself with a long one [sentence], but he will make sure there are no folds in it, no vaguenesses, no parenthetical interruptions of its view as a whole; when he has done with it, it won’t be a sea-serpent with half of its arches under the water; it will be a torch-light procession. (57 words)

Long sentences can become confusing when we put too much information in brackets, overuse ‘which’ clauses or make our subjects too wordy.

Overloading sentences with information in brackets

We sometimes try to make our sentences convey too much information by embedding extra information in brackets. Take this sentence from a Westpac creditcard brochure about international travel insurance.

I think it means that you have to have a return ticket before you leave the country and pre-pay at least $500 of your overseas travel expenses, including your ticket, with your credit card. If you take out the information in brackets, the sentence is a bit easier.

‘A cardholder becomes eligible for this Overseas travel insurance when, before leaving Australia on an overseas journey, they have a return overseas travel ticket, and A$500 of each of their prepaid travel costs have been charged to the cardholder’s eligible credit card account.’

Although clearer this sentence still needs rewriting because the word ‘each’ is confusing, given that the items in brackets are followed by ‘and/or’. Also it raises questions: for example, if I pay for my accommodation with cash or another credit card, am I still eligible for insurance? The information in brackets could have been an additional sentence using bullet points. Overseas travel expenses include the costs of:

I’ve tried to tweak this sentence, but it still doesn’t work, because the thinking behind it isn’t clear. Sometimes you just have to start again and work out what you are trying to say.

Overloading sentences with too much information in ‘which’ clauses

Take this example that I found in the Australian Financial Review during the GFC.

‘For example, the conversion of former US investment banking giants Goldman Sachs and Morgan Stanley into commercial banks (which have tougher capital requirements) had the unintended consequence of squeezing funding to hedge funds – which in turn has exacerbated their dumping of assets across world markets.’ (45 words)

I have highlighted ‘which’ as causing the sentence overload, but it has an additional problem. I am not sure who ‘their’ relates to (unclear antecedent) – who’s doing the dumping?

Overloading the subject with too many words

Sentences that have a lengthy subject (nominal group or noun phrase) are difficult to read.

[The young male rats that were from the same colony as the rats with symptoms of the disease, but which do not show sign of the disease at this stage of their development] were used as the control group.

Rewritten to make the subject shorter:

[The symptom-free young male rats] were used as the control group. These rats were from the same colony as the rats showing symptoms of the disease.

What other causes of overloaded sentences have you noticed?

Enrol in my online Business Writing course to upgrade your writing and editing skills.

WriteAussie – some Australian and American spelling differences How to use Apostrophes