Spacing between sentences: one or two?

Use one space between sentences 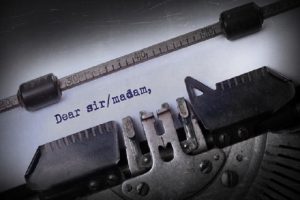 In the days of typewriters we used double spaces between sentences.

According to modern style guides, including the Australian Style manual and the American AP Stylebook and The Chicago Manual of Style, you should use a single space after a full stop, question mark or exclamation mark.

‘In typewritten (as distinct from typeset) material, it was customary to place two spaces after a colon, semicolon, full stop or other sentence-closing punctuation. Programs for word processing and desktop publishing offer more sophisticated, variable spacing, so this practice of double spacing is now avoided because it can create distracting gaps on a page.’

People have strong views on this topic, and it is a hard habit to break.

If you are a ‘double spacer’, I suggest you do a ‘search and replace’ when you’ve finished writing until you’ve retrained your fingers.

Not everyone is convinced about single spacing

Several people think this study was flawed. For example, Tara Haelle says it was ‘based on a single study of 60 college students, where only the students who use double spaces themselves read text faster (a whopping 3% faster!) in a fixed-width font with two spaces instead of one after periods.’

No doubt the debate will continue, but in the meantime I remain a single spacer.

To learn more about style and usage, register for my online Grammar, Punctuation and Usage course.

Only: position in a sentence Nominalisation: the power of verbs