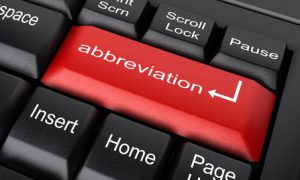 In The Grammar Factor last month, I looked at acronyms, and this month I am looking at shortened words and contractions.

Shortened words
When a word is abbreviated after the first few letters, the traditional rule is to put a full stop after the abbreviation. If the abbreviation comes at the end of a sentence, you don’t need an extra full stop, but you do add a question mark or exclamation mark if required.

cont.
The abbreviation for continued is cont.
When should you use cont.?

I think American writers tend to use full stops more in abbreviated words than Australian and New Zealand writers. For instance, would you write Prof. James or Prof James?

Contractions
A contraction is a shortened form of a word retaining the first and last letters (Mr, Ltd). Some contractions have apostrophes to indicate the missing letters (isn’t, can’t).

Nowadays, Australian and New Zealand writers don’t use a full stop with a contraction but American writers often do (Dr. Jones).

NB Some people use a contraction (cont’d) to abbreviate continued.

Use shortened forms in informal writing and when space is tight, for example, dates and times for an event.

Contractions are often used in informal, conversational writing, but some people don’t like them at all. I once used a  proofreader who took every contraction out of a book I was writing – I put them back in!

Do you use contractions in your writing?

I have changed the payment method for my online writing courses. You now have access to all the online courses for just A$39.95 a month. The payment rolls over, but you can cancel at any time.

Check out the courses now and brush up on your grammar and writing styles.

Question: What do you recommend as the salutation for an email?

I have been using ‘Hi’, but I notice an increasing number of senders using ‘Good morning/afternoon’, ‘Hello’, ‘G’day’, ‘Dear’, and some just use the name.

Answer: My preference is ‘Hi’ too, but I am not sure that it matters.

I think the problem with ‘Good morning/afternoon’ is that you don’t know when the person will read it. ‘Dear’ sometimes seems too formal, ‘G’day’ and ‘Hello’ are sometimes too informal, and no salutation is often too abrupt.

Having said that, I might drop the salutation with friends or if an email correspondence is going back and forth.

My question: What do you think are the most common issues with the way people write emails?

Question: What’s the difference between dependent and dependant?

Answer: In Australian and New Zealand English, dependant is a noun and means someone who depends on support from others. This support often has a financial component.

The child is a dependant.

Dependent is an adjective and means relying on.

The usual preposition to use with dependent is on, not of.

The success of the project is dependent on their goodwill.

American spelling uses dependent for both meanings. Much simpler!

23 Witty Grammar Jokes & Puns to Satisfy Your Inner Grammar Nerd
Many of these have been around for years, but there are a few I hadn’t seen before. Click here.

Test your pronunciation with this poem (thanks to the reader who sent me this link).
Click here.

Double-edged words
Would you use ‘feisty’ to apply to a woman or man? And what about ‘assertive’ or ‘nagging’? Read more.

How to write emails if you want people to actually respond
The answer: ‘Write as if you’re 9 years old’. Read more.

The New Yorker copyedits Trump!
The New Yorker edited Trump’s response to the Pope. (In February, the pope stated that if Donald Trump is interested in building only walls, and not bridges, then he is ‘not Christian’. Read more.

Word of the month

The Waverley Council is doing some work on the tunnels that run under Queen Elizabeth Drive at Bondi Beach and it has a public sign on the beach promenade telling people about the work.

‘The tunnels were built in 1928 to provide pedestrian access under Queen Elizabeth Drive to the beach. One of the tunnels also provided women access straight from the sand to the women’s bathroom/change room. They extended far into the beach as groynes. The groynes were demolished as a security measure during WW2.’

I am going to admit to a vocab deficiency here – I had never heard the word ‘groyne’ before and had to look it up in the dictionary. The Macquarie Dictionary defines groyne as ‘a small jetty built out into the sea or a river in order to prevent erosion of the beach or bank’.

Do you think groyne was the best choice of word for a public sign?

‘Close the door. Write with no one looking over your shoulder.’
US author Barbara Kingsolver