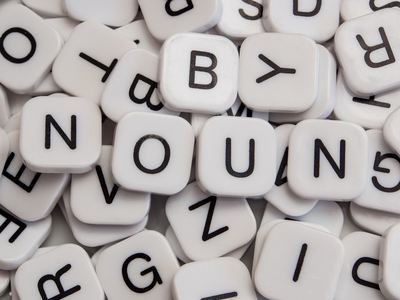 Last month I wrote about verbing (turning nouns into verbs) and an e-newsletter reader pointed out that we also turn verbs and adjectives into nouns.

The process of turning verbs and adjectives into nouns is known as nominalisation (nominalization if you use American spelling!). It’s also sometimes called ‘nouning’.

There are two types of nominalisation:

Nominalisations formed with suffixes have a bad name because they are associated with bureaucratic or academic writing and there are many humorous examples of the overuse of nominalisations. Watch Helen Sword’s YouTube video on zombie nouns or read the text here.

The proliferation of nominalisations in a discursive formation may be an indication of a tendency towards pomposity and abstraction.

Writers who overload their sentences with nominalisations tend to sound pompous and abstract.

You don’t need to read many business or academic reports to find an abundance of nominalisations. Compare:

Nominalisations are useful when you want to express abstract concepts or attach meaning to an accompanying verb.

Nominalisations are useful for abstract concepts

We can often express abstract concepts with nominalisations more concisely than using verbs. For example, the word nominalisation is itself a nominalisation (and an ugly word, in my opinion). Other examples are governance and sustainability.

Yet trying to describe these concepts with verbs could make your writing more verbose.

Nominalisations give power to an accompanying verb

Sometimes you might want to give a verb accompanying a nominalisation additional meaning. Compare the following two sentences:

Zero-change nominalisations are used more in informal writing than business or academic writing and attract criticism because some grate the same way verbing can (the group dialogued).

My invite arrived today.
The main take-away from the workshop was to avoid overusing nominalisations.
Do you have a solve for this problem?
What is the ask?

She put her knowledge to good use.
Many people dislike change.
It was a big ask.

Just as verbing isn’t new, zero-change nominalisations aren’t new either. For instance, reveal, solve and ask have been used as nouns for centuries.

In an article in The New York Times, rather than decry these nominalisations, Henry Hitchings looks at why we use them. He says they can look fresher and more concise than the more traditional noun.

They can also have a distancing effect – ‘What is the ask?’ seems less personal than ‘What are they asking?’

The dark side of nominalisations

Although nominalisations aren’t intrinsically bad, they have their dark side, which Henry Hitchings explores further in another post. In brief, they can sap vitality out of the language, eliminate context, mask any sense of urgency and put the emphasis on actions at the expense of who’s performing the actions.

Should you use nominalisations in your writing?

I suggest you analyse your own writing to see how often you’re using  nominalisations. The easiest ones to spot are those ending in -ment, -ance and -ion, and they’re often the easiest to change.

Would your writing be more vibrant if you turned some nominalisations into verbs?

PS For consistency, I’ve used nominalisation rather than nominalization throughout.

Learn more about writing and grammar with my online courses.

How to write long sentences well All about Words: turning verbs into nouns, decision-making and more