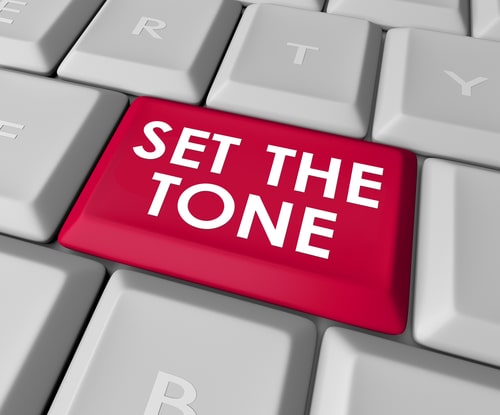 In business writing, tone has a spectrum ranging from extremely casual (abbreviations, emoticons) to overly official. Most business writers use neither extreme – your emails are likely to be conversational, yet professional, and your reports will be formal without being overly bureaucratic.

Most of us know intuitively when we’re using the ‘right’ tone. When we misjudge tone, it’s usually because we haven’t thought enough about our audience and anticipated their reactions. The best way to check tone in formal writing is to put your document aside overnight. You will seldom do that with an email unless it is particularly sensitive but reading it aloud can help you check the tone.

But what are the writing elements that create tone?

In most emails, we mainly use the first person (I, me, mine or we, us, our) and the second person (you). The use of the first and second person immediately makes writing conversational.

In more formal writing, such as reports and memos, most writers avoid using the first person singular (I, me, mine) and the second person (you). Instead, they use nouns to describe who’s performed an action (Management, The company) or the passive voice (It was decided).

Occasionally, writers switch to the first person plural (we, us, our), which I think is fine as long as it clear who they are referring to. For example, are they referring to the company as whole or their team?

In an email, you’ll probably use contractions (we’ll instead of we will).

In more formal business communications, you will spell words out in full (we will).

In an email, most people use short, simple words. You may be more formal if you are writing to a senior person or someone you don’t know well, but you will probably still use plain language.

While reports should still be in plain language with a minimum of jargon (a wishful thought!), inevitably you will dress up your language a bit. For example, I seldom see got or use in a report.  They will usually be replaced with more specific words.

Although there is nothing grammatically wrong with starting sentences with And or But, I seldom see them in formal writing. Instead, writers will use words such as However or In addition.

Emails are full of dashes – they allow us to add extra information without having to fill in all the details.

The regulators – the usual crew – are putting the pressure on.

The regulators, the Australian Prudential Regulation Authority and the Australian Securities and Investments Commission, have increased their compliance requirements.

Question marks are commonly used in emails as the writer expects (or hopes) the person receiving the email will reply. They are also commonly used in marketing copy to capture readers’ attention.

Question marks are used much more sparingly in formal writing. If they are used, they might be used in a heading and the writer answers the question in the following paragraph.

The role of the exclamation mark has changed over the last few years and is now used in emails and texts to convey a friendly tone.

Most emails will be in the active voice because they are conversational in tone. Inevitably, some passive will creep into more formal writing. You need to be aware of your use of the passive voice as too much passive can make the tone bureaucratic.

In formal documents, such as board papers, it’s a question of finding the right balance for the tone. If paragraphs and sentences are too short, the writing can be jerky. When paragraphs are long and sentences ramble on, the tone can be turgid.

If you want to influence people in emails or more formal writing, you use prose (paragraphs and sentences), or a mixture of prose and bullet points. Bullet points on their own are seldom convincing because they don’t convey enough contextual information to set the scene and get the reader on side.

Bullet points come into their own to back up statements and for lists of discrete items.

All about Words: online writing and grammar courses, procrastination Check your tone in emails