Many new verbs are created from adding endings to nouns 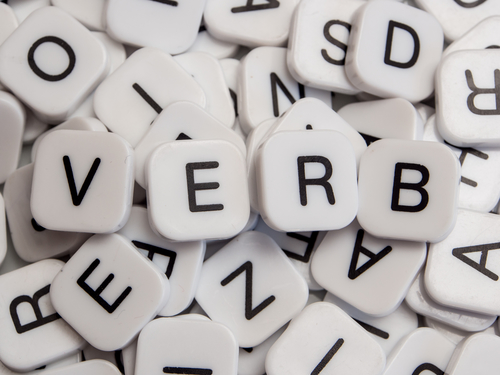 When we add endings to nouns to turn them into verbs, it’s known as ‘verbing’, ‘verbification’, ‘denomilisation’ or ‘verbifying’ – ugly words to describe a common process!

She eyed an opportunity.
He tabled a proposal.
She authored a book.
They accessed a lift.
You can friend and unfriend people on Facebook.
She messaged someone on her phone.

Some of these verbs even start off as trade names and over time we drop the initial capital.

He hoovered the carpets.
She googled how to grow herbs.
They xeroxed the documents.
They skyped regularly.

The first instance of the word verbification was in 1871, but the process has occurred for centuries. Psychologist Steven Pinker (The Sense of Style, 2014) says a fifth of English verbs probably started out as nouns or adjectives.

And apparently, verbing is now happening faster than ever these days.

Not everyone likes verbing

There is no way verbing will disappear, but not everyone likes the new verbs, largely because some are buzzwords, which may or may not stand the test of time. When words first come into the language they are known as neologisms. Some survive and others wither and die.

Some sound ugly to the ear – at least initially, until we get used to them.

We drilled down into the detail.
The company onboarded the new customers.
They timelined the project.
The team interfaced.
The group dialogued.
We will self-perform the works.

Yet even if we do create some ugly verbs, the flexibility of English is inspiring, and as Michael Quinion says (November 2009 newsletter), verbing is ‘splendidly useful’.

‘MORE VERBING NOUNS Courtesy of Neill Hicks: “I placed a telephone order and told the clerk that if I was not at home the delivery driver could just leave the item.’Okay, we can PORCH it for you, then?’ the clerk asked. I agreed that the purchase could be PORCHED and that any future orders could also be PORCHABLE.”

‘It’s yet another good example of the flexibility of English, whose lack of inflections means that a word can readily switch between serving several different roles in a sentence. Many people object to such creations and decry them as a fault, but I think it’s a feature, a splendidly useful one.’

He no longer writes his newsletter, but you can still search the archives.

‘Part of the strength and vitality of English is its readiness to welcome new words and expressions and to accept new meanings for old words. Yet such meanings and uses often depart as quickly as they arrived…

‘Before grabbing the latest usage, ask yourself a few questions. Is it likely to pass the test of time? If not, are you using it to show just how cool you are? Has it already become a cliché? Does it do a job no other word or expression does just as well? Does it rob the language of a useful or well-liked meaning? Is it being adapted to make the writer’s prose sharper, crisper, more euphonious, easier to understand – in other words, better? Or to make it seem more with it (yes, that was cool once, just as cool is cool now), more pompous, more bureaucratic or more politically correct – in other words, worse?’

Use verbs your audience will understand

The advice given by The Economist Style Guide is really useful, but if we followed it every time we were wondering whether or not to use a word, we’d never get anything written!

My advice is to use verbs your readers will understand and relate to. I was editing a colleague’s work and questioned self-perform. She informed me it was industry jargon that everyone would understand. It stayed in her copy!

Learn  more about writing with  my online Business Writing course. This course is suitable for anyone who wants to take their business writing from good to great.