That: When can you delete ‘that’? 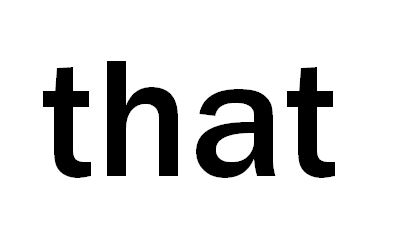 Many people believe the word that is overused and can often be deleted. In fact, it’s a pet hate for some people who rigorously delete every that they see.

Which sentence do you prefer?

However, I was not satisfied with relying on my ear, so went searching for an explanation.

That with bridge and non-bridge nouns

Linguist Neal Whiteman distinguishes between bridge and non-bridge verbs. Bridge verbs are the most common verbs of speech and thought, such as say, think, know, claim, hear and believe, and you don’t need that after them.

I thought you’d say that.
I hear she’s been promoted.

Non-bridge verbs carry extra meaning and sound better if followed by that. They include advocate, assert, contend, declare, estimate, clarify, propose and state.

Neal Whiteman says that sometimes omitting that after a non-bridge verb can be confusing, and he quotes an example from Bryan Garner’s Modern American Usage.

‘Son acknowledges being a member of a minority… may have helped him turn his eyes abroad early.’

The Associated Press Stylebook says to use that when a time element intervenes between the verb and the following dependent clause. It gives the following example:

‘The president said Monday that he had signed the bill.’

That after nouns and adjectives

It really does seem to depend on your ear regarding that after nouns and adjectives. Which sentences do you think sound better?

That and relative clauses

Relative clauses, sometimes called adjectival clauses, define, describe or evaluate the noun they’re attached to. They are introduced by a relative pronoun, such as who, that or which.

When that introduces a relative clause it can often be omitted. Pam Peters gives the following example in The Cambridge Guide to English Usage:

‘The TV program (that) we saw last night had a powerful impact on us.’

In the following sentence that is needed because it is the subject of the relative clause.

‘A TV program that had a powerful impact on us was shown last night.’

Stylebook says: ‘When in doubt, include that. Omission can hurt. Inclusion never does.’

If you want to know more about grammar, take a look at my online course: Grammar, Punctuation and Usage.

Read my post on the difference between which and that.

All about Words: eggcorns and selfie Storytelling in business and copywriting