When to use the active voice 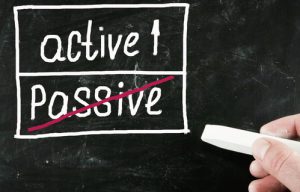 I wrote a blog in defence of the passive voice because it gets so much bad press. In this blog I want to redress the balance and acknowledge the virtues of the active voice.

In case you didn’t read the previous blog, let’s define the active and passive voice. The distinction is based on a ‘whodunnit’ of the verb. If we know who or what dunnit, the sentence is active. If we don’t know who dunnit, or we find out who dunnit after the verb, then the sentence is passive.

The active voice is more direct and easier to read

In practice, most of us use a mixture of active and passive voice without thinking about it, but sentences in the active voice are often clearer and more direct. We know immediately who’s doing what, and our sentences have fewer ‘helping’ verbs.

We considered the matter.
The matter has been considered.

Use the active voice in emails

In most email communication we are using ‘I’ and ‘you’ pronouns, so the active voice makes sense. Just read a few of your own emails and you’ll see how active most of your sentences are.

Avoid the ‘by’ passive

Many passives that name the doer after the verb would be stronger in the active voice. Compare the following sentences:

A common complaint against the passive is that it hides responsibility and more active writing encourages writers to take ownership of issues. Compare:

One of the main reasons why the passive voice gets such a bad name is that many business writers overuse it to make their writing seem more formal and authoritative. The result is often turgid, difficult-to-read prose. Take this example:

Customer-facing staff will be provided with information to assist them answering customer queries. Customers will be given sufficient notification of the change, but it is acknowledged that some complaints will still be received.

In the following rewrite I’ve not used ‘we’ because many organisations prefer the third person in formal communication. (NB I think ‘we’ is acceptable in most business writing, even board papers.)

Customer-facing staff will receive information to help them answer customer queries. Customers will get sufficient notification of the change, but complaints will still occur.

The passive voice can even sound clumsy in spoken speech. Take this airline example:

Please ensure that your mobile is not used until you are inside the terminal.

A challenge: If you’re using Microsoft Word, turn on the readability statistics. After you’ve done a spell check, a box will pop up on your screen giving you information such as the reading age of your document and the percentage of passive voice. In most documents, the passive percentage should be quite low.

Learn more about grammar with my online course: Grammar, Punctuation and Usage.