All about Words: commas in court, punctuation in urls and more 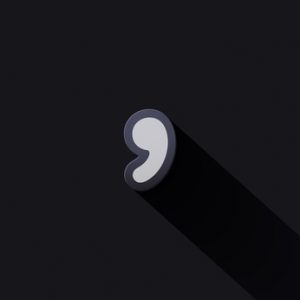 Commas can be costly. Take a look at these three comma court cases.

US$10 million overtime dispute hinges on the Oxford (serial) comma

The first comma case is about the Oxford comma (also known as the serial comma).

First a definition. A comma is sometimes added between the last two items in a list for clarity.

Another example often given is: I’d like to thank my parents, Mother Teresa and the pope.

An Oxford comma dispute about overtime started in Maine in 2014 when three drivers sued Oakhurst Dairy.

The state law says overtime rules do not apply to:

Learn more about commas with my online course, An A to Z of Punctuation.

Question: If a sentence ends in an url, should you end it with a full stop?

Would your view differ if the sentence was on different mediums (e.g. in electronic print, on television, etc.)?

My rationale was that a full stop might interfere with the link. That’s not true today.

My online stuff is probably inconsistent now because I haven’t changed old material!

Grammar Girl wrote about this subject in 2015. I note that she used to leave a space and then put a full stop – I never used that style.

I wonder if this is a style issue rather than a punctuation one. If you had no full stop in all mediums, would anyone object?

Question: In the following sentence, would ‘less’ be wrong?

Could ‘less’ ever be considered a correct option?

Answer: Fewer is definitely more ‘correct’ in your sentence, but less is increasingly used instead of less, especially with numbers.

We seldom queue in supermarkets with ‘10 or fewer items’. The sign usually says ’10 or less items’.

I drank fewer glasses (count noun) of water than you. I drank less water (noncount noun).

In The Sense of Style, Steven Pinker says fewer/less is a dubious rule of style. He says:

‘Like many dubious rules of usage, the less-fewer distinction has a smidgen of validity as a pointer of style. In cases where less and fewer are both available to a writer, such as less/fewer than twenty of the students voted, the word fewer is the better choice in classic style because it enhances vividness and concreteness. But that does not mean that less is a grammatical error.’

Learn more about grammar with one of my online courses: Grammar Essentials or Biz Grammar.

Dashes, commas or parentheses?
Another reader said that he uses dashes to introduce explanatory asides and uses them in tandem.

‘I felt that the speaker – despite his lack of knowledge – was onto something.’

He said that ‘dashes give the aside more emphasis than two commas, because the mind has to pause slightly longer’.

How do you decide when to use dashes, commas or parentheses?

Split infinitives
In my last e-newsletter I said ‘People seem to either love them or hate them’ referring to exclamation marks.

A reader commented that he was taught in grade school not to split infinitives, so the sentence should have read ‘People seem either to love them or hate them.’

I cover this topic in my blog: Five grammar myths.

This month, the Facebook group looked at topics such as:

On the topic of dashes, a reader sent me a link to the Australian PM’s introduction to a multicultural statement. The style for dashes is inconsistent and distracting.

If you’re not already a member of the Facebook group, why not join us?

Toddlers’ knowledge of grammar ‘explodes’ when they hit 24 months
This study suggests that grammar is learned, not innate.

Cursive is making a comeback in American elementary schools
Can you read your own handwriting? Do you think kids need to learn to write these days? Read more.

How writing an article will change you (and your business)
The idea of writing daily seems to be in vogue at the moment. Do you have a daily writing habit?

Lengthy online terms
Guess which online provider’s contract ‘amounts to some 73,198 words and takes the average reader eight hours and 59 minutes to read – longer than Shakespeare’s Hamlet and Macbeth put together’.

Read more to find out.

Rid your business writing of these 10 bits of jargon
What phrases do you hate in business writing? This post hates phrases such as ‘rock star’, ‘moving forward’ and ‘paradigm shift’. Read more.

Word of the month

A reader told me about this word, which I had never heard before. He came across it in 1599: A Year in the Life of William Shakespeare by William Shapiro.

It derives from three Greek words which mean ‘one by means of two’, a single idea conveyed by a pairing of nouns linked by ‘and’. Common examples are ‘law and order’, ‘house and home’, and ‘sound and fury’.

Some examples from Hamlet:

The two words or phrases are similar, so seem tautological, but they are not quite the same.

‘If a sentence, no matter how excellent, does not illuminate your subject in some new and useful way, scratch it out.’
Kurt Vonnegut

Commas in court cases Use nonsexist language in business writing