All about Words: how to write a summary, dates, acronyms and initialisms

Sum it up: how to write a summary 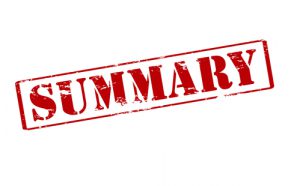 A summary is a concise account of the main points in a document. Some of the terms used to describe summaries in business writing are: ‘executive summary’, ‘overview’, ‘key points’, ‘issues’ or just ‘summary’.

How you approach writing a summary depends on what type of document you are summarising. Some documents, such as board papers, have ‘short summaries’, and others, such as annual reports, have ‘long summaries’ (in comparison).

Question: Is it is acceptable to write the date as follows?

Answer (not relevant for US readers):

The modern Australian way of writing dates is:

The Australian government Style manual says: ‘This structure is unambiguous, requires no punctuation, and progresses logically from day to month to year.’

However, this style causes a problem at the beginning of a sentence because we don’t start sentences with numbers.

I usually try and rearrange the words in the sentence to avoid the problem, but you could do as you suggest and write:

Using my avoidance technique, you could say:

Learn more about styles with my online course, Styles for Business Writing.

Fewer and less
Several of you pointed out that in the example given last month (below), the agreement is with the percentage, not the children, so ‘less’ would be  more correct than ‘fewer’.

Read what the Chicago Manual of Style Online has to say in response to a question about fewer and less with percentages.

A URL or an url?
My writing about ‘an url’ instead of ‘a URL’ caused me grief on two fronts:

I will have to mend my ways! Interestingly, it is a term that I have never seen spelt out. It stands for ‘uniform resource locator’.

Punctuation podcast
Listen to a podcast on punctuation with Page OK’er and Comma Queen Mary Norris.

What happened to who?
An interesting article about the pronoun who.

How to use nonsexist language in business writing
A recent blog of mine.

What happened to the proofreader?
Topshop made an embarrassing mistake on a t-shirt. Can you spot it?

Mugged
This powerful Tracey Ullman sketch has had over 30 million views and counting. It’s worth watching!

Join the All about words Facebook group. We share serious and fun stuff about writing and grammar.

‘And how is clarity to be achieved? Mainly by taking trouble, and by writing to serve people rather than to impress them.’
Frank Lucas, English scholar and critic